skip to main | skip to sidebar

Zero Degrees of Separation: My 2011 At The Movies

I am still, it turns out, terribly susceptible to the delirium of festival fever, and in 2011, the temperature cranked past even my own thresholds, with the demented overlap in the last quarter making matters even more grueling. At the end of that week and a half, I was down with a particularly vicious strain of influenza.

Cinemanila was still the sovereign colossus, as domestic festivals go, Cinema One Originals the squirrely daredevil, Cinemalaya the tasteful prude, although they seem to have grown an extra set of balls to let films like Amok slip through. All three had a robust year. And, despite the persistent and exasperating lament that local cinema is on a downward spiral, and despite bully tactics from the big studios, who got their ass handed back to them at one point, and by a delightful indie zombie film at that, things have settled into a groove of comfortable productivity. The year was copious with moments, still not enough perhaps, as it never always is. But at least now there's an envelope to push.

I flew to HKIFF just as the year begun and co-programmed the 4th .MOV a little after half of it had come to pass. And these were the twin piths of my festival year, the latter slightly moreso. I also curated an exhibit for it, designed posters, translated parts of the poetry anthology we launched, had a hand in marketing, got wrung through the logistical brouhaha, was as privvy, in as hands-on a manner as possible for someone a few jurisdictions away from the main team, to the exhaustion, and exhilaration, of running even a festival as small as ours, not to mention the spate of Club.MOV screenings leading up to it, abolished by default with the sudden, saddening foreclosure of Mogwai Cinematheque. After this, I vowed to never again grumble over another festival's snafus and glitches. But I'd do it all over again in a snap. And three years from now, if the world doesn't end as scheduled, I will be.

Movie-going, the communal experience of going out to a screening and watching a film with people, remained my advocacy. And I try, as much as I can, to disqualify torrents and DVDs from my list, charitably allotting one slot for it, with this year going to a film I almost saw in a theater. I did cheat a little with a couple of films I saw publicly, albeit in another country, but the rest of the list are films shown in Manila, never mind the nature of its run, never mind if it even had a run. As long as it wasn't at home on my TV, or worse, on my laptop. I did see a lot of films that way, and I imagine a few could've possibly made the cut. But with or without these rules, I suspect the list won't be too far off from this one.

I did miss Lav's Century of Birthing. I missed Adolf's Isda (Fable of the Fish), too. I missed Teng Mangansakan's Cartas De La Soledad. I missed Victor Villanueva's My Paranormal Romance. I missed Regiben Romana's Sakay Sa Hangin (Windblown). I missed Jewel Maranan's Tundong Magiliw. These are some of my sins of omission, if you will, prey to my usual deficiencies of stamina and time and resources and singled out because they're filmmakers I like. I did get to see nearly all the locally shown foreign product, arthouse staples and commercial tentpoles both, which ran the usual gamut of odious to tepid to fits of spunk here and there that tended to dissipate the further away you got from the works, with only Terence Malick's The Tree of Life, Wim Wenders' Pina, Justin Lin's Fast Five, Gore Verbinski's Rango and Tarsem's Immortals having sufficient traction and exuberance to deserve a shout-out, not to mention Todd Haynes' foray into longform TV, Mildred Pierce. I liked them all, sure. I liked a tremendous amount of films this year, mostly local. But for my 2011 list, anything less than love I had little room for.

1. 20 Cigarettes (James Benning, USA, HKIFF): James Benning asks 20 of his friends to smoke in their respective environments and films what happens to them in the time it takes to finish a stick. His first work that has to do with people rather than landscapes or architecture, has a strand of voyeurism that can't be helped but is also partially the point. As knotty to parse and even knottier to push, this, like all his films, behaves like an installation but it's the conditions of a theater that are conducive to what it ultimately asks of us: the acute observation of duration in stillness. 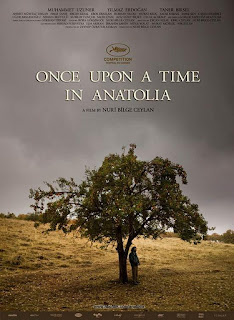 2. Once Upon A Time In Anatolia (Nuri Bilge Ceylan, Turkey, Cinemanila): As disingenuous, and as lazy, as it is to invoke the word "magical" for something shot through with secrets and lies and regrets and deaths and the banality of the everyday, regardless of how wryly funny it can sometimes get, no other word feels more apt, even if it's only to describe what random lightning turns the otherwise barren Turkish countryside into. The search for a dead body becomes, for a posse of crusty and haggard civil servants, a night, and eventually a day, of going round in circles, of straying off paths, of detours, the oddest and loveliest being a small village they repair to where the lights go out and an angel appears to serve them coffee. 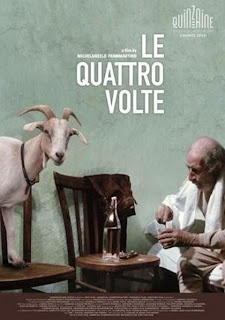 3. Le Quattro Volte (The Four Times) (Michelangelo Frammartino, Italy, HKIFF): Later on, when the nature of its metaphysics becomes apparent, you tend to marvel at the purity with which it was poeticized, not least with that single take everybody who's seen it is frothing in the mouth about, and rightly so, and with what is hands down the finest goat acting in the history of cinema. The four times of the title refers to the four lives that supposedly live within us and that we go through during rebirth: man, animal, vegetable, mineral. It is also, incidentally, the cast list. 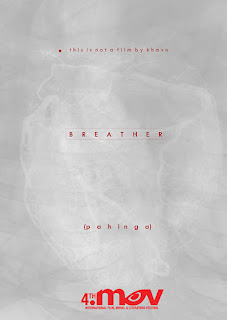 4. Breather (Pahinga) (Khavn De La Cruz, Philippines, .MOV) : The cancer diary it started out as became something more after Khavn's father passed away during the editing, something closer to exorcism, to magical thinking, but not to eulogy, as it's loss is not so much given over to the part of nostalgia that aches but more to the part that exhilarates. A love letter, really, as much to the filmmaker confronting his own mortality as to the parent who left a hole when he succumbed to his, but also to that brief and immortal time they both spent in the shadow of their longest goodbye. 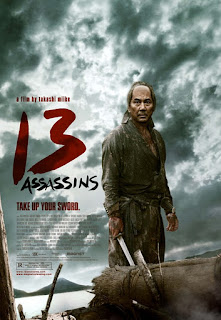 5. 13 Assassins (Takashi Miike, Japan, Cinemanila): Having long parted ways with Seven Samurai as both my Kurosawa and jidaigeki touchstone, here, then, is my substitute, itself a remake but enthusiastically so. The density of the nihilism with which the enemy here is fleshed out demands such an outsize catharsis in his climactic taking down, that no less than half an hour of glorious comeuppance would seem to suffice. Miike knows this. And gives us 45 feral, bloody minutes of it. 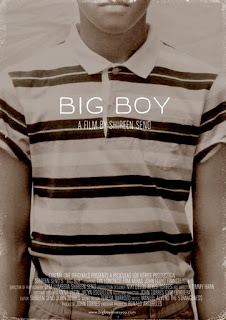 6. Big Boy (Shireen Seno, Philippines, Cinema One Originals): A certain warm and often lovely and also familiar strangeness runs through here, as it's not only a film that's both about memory and like a memory, in the way it looks and feels and sounds and threatens to recede or disperse, but also about how every generation's experience of growing up has connective tissues that make them all kindred. 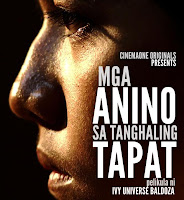 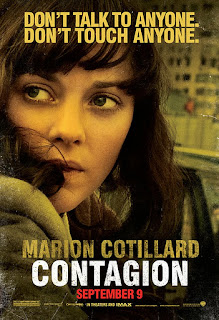 8. Contagion (Steven Soderbergh, USA, Domestic Release):
Pitched below the requisite volume of panic and spectacle, of course it's going to go over many heads spoiling for crackle, for racing against time and eleventh hour salvation. But its' grim, procedural sobriety has that low hum of unease and exposure. It starts with a cough in the dark, disembodied and nearby, as if saying here is your doom in small, the littlest of things you can't see, loosed now in a world that connects like a network of veins at the speed of god. If none of this makes you very nervous, you really ought to be. 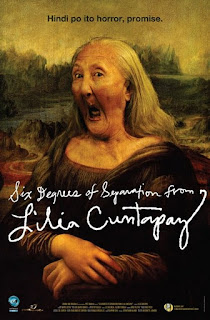 9. Six Degrees of Separation From Lillia Cuntapay (Antoinette Jadaone, Philippines, Cinema One Originals):
If nothing else, for not being the one trick pony I always felt it was prone to becoming, at least on paper, cynical
as I was
a
t first about how deep the cachet of its subject ran and if it could sustain more than a couple of gags. Antoinette calls this a mockumentary but it veers closer to that freak overlap of documentary and fiction,
and in exalting
Lillia Cuntapay, the iconic bit player, certainly a phenomenon unique to us, it
subtly lambasts how stuck-up the showbiz industry is and how intolerably embarrassing, and distressing, our thrall to it remains regardless. That, and it's also a hoot. 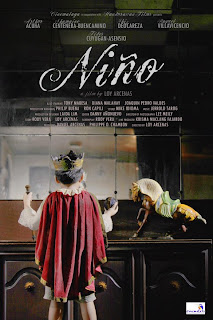 10. Niño (Loy Arcenas,
Philippines, Cinemalaya):
Time's a goon, it's been said, and it is, and sometimes it wins.
Emptied-out desperate things palpitate against
obsolescence and all its useless beauties
, not least being the centrifugal matriarch whose opera star has faded but also the religious finery leeched of their divinities but for the wild hope she hangs on it. 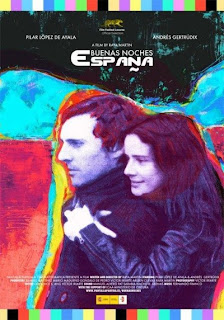 Buenas Noches España (Raya Martin, Philippines-Spain, Spanish Film Festival): Raya's experimental opiate is a bit of a quandary for me, hence its position, as I do like the form, but I like the idea of the form even more, and absolutely love the idea of the form in the context of where his ouevre stands, on the cusp of either repeating himself into perpetuity or going so far out on a limb it's likely to wind a lot of people up, which it did, which it should. Painters and musicians get to color outside the lines the way he does here, sometimes to fanfare, sometimes to indifference, but filmmakers are routinely frowned upon, often by other filmmakers, for merely being curious as to what's on the peripheries of the three-act narrative convention we box the medium in, and are all but lynched when they act on that curiosity. This is also where our national cinema stands at the moment, trying to figure out what it is, and slowly fitting itself into safe absolutes in the attempt, when what it needs to do is to maybe wind a few people up. Cinema is the youngest art, and Philippine Cinema even younger. Too young, in fact, to get all wussy about going out on limbs.
Posted by dodo dayao at 12:31 AM No comments: